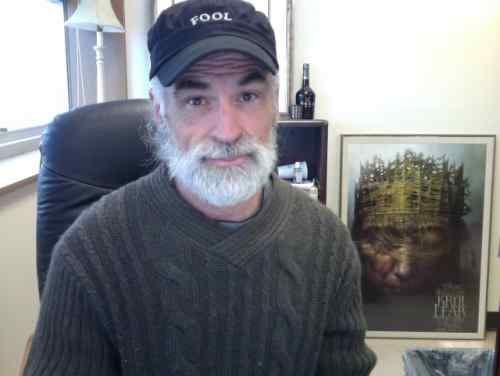 Professor Daigle has taught at  Washington College since 1990. He is currently Director of the Gibson Center for the Arts. He was the inaugural Director of the Communications and Media Studies program and served as chair of the Department of Theatre for 17 years. His regular Washington College courses include all levels of acting and directing but he has taught 18 different courses here including courses in computer-aided design, lighting design,  traditional Japanese theater and theatre management.

Daigle has directed over 30 productions at Washington College. His focus in recent years has been on new plays and he has directed 8 world premiers here at the College, Most recently Dreaming Brave and True, by Steven Spotswood. Several of those plays have gone on to subsequent productions at professional theatres including, All Blues by Robert Earl Price that was produced in collaboration with 7 Stages Theatre in Atlanta, Georgia; The Squeaky Wheel Squeaks, by Brian Shaughnessy, performed in Washington D.C., Boulder, Kansas City, Minneapolis, Los Angeles and Honolulu and We, Tiresias by Steven Spotswood.. A subsequent production, produced by Forum Theatre and directed by Matt Ripa, was  named “Best Drama” at the 2012 Capital Fringe Festival and  “Best Local Play” by the Washington City Paper in D.C,.

Other productions directed by Professor Daigle that were not affiliated with Washington College have been seen in Maine, Hawaii, Scotland, Kyoto, Samoa, Denver, Los Angeles, and D.C. as well as the more exotic locales of Chestertown and Church Hill.

As a research fellow at the Kyoto Arts Center he performed the kabuki role of Tandanyu at the imperial palace in Kyoto. He has studied for a year with Nomura Shiro and Nomura Mansaku, two of Japan’s “Living National Treasures” in the traditional forms of Noh and Kyogen. His translation, with Junko Sakaba, of Buaku was the first English language Kyogen play performed at the National Noh Theatre in Tokyo. His main focus in the last several years has been on new plays. View Curriculum Vitae (PDF)

Under Milk Wood, Shrew, Drinking In America, Waiting for Godot, Angels in America, My Children! My Africa, Hamlet, Pounding Nails… All in the Timing, Sex, Drugs and Rock and Roll,  Lebensraum, Molly Sweeney, Buaku, The Laramie Project, Extreme Exposure, Duchamp Sat Here, Twelfth Night, My Name is Rachel Corrie, Zoo Story, We Tiresias, Monologues From the Edge, Golden Sardine, Death and the Maiden, All Blues, War Stories, Clybourne Park, Cross-Dressers, Drunks and Fools,Too Much Light, The Cripple of Inishmaan, Dreaming Brave and True, 8x10: An Evening of Short Plays.