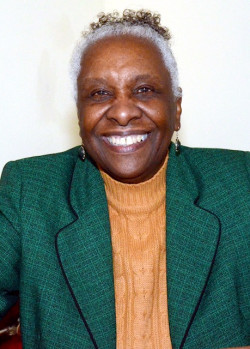 Carolyn Brooks is a native of Kent County, Maryland. She graduated from the historic Garnet High School in Chestertown. Brooks earned a Bachelor of Science in Psychology from Morgan State University in Baltimore. She also obtained a Master’s in Special Education from Coppin State College in Baltimore.

Brooks worked for the State of Maryland Department of Labor for 43 years. She assisted jobseekers in Baltimore and the entire eastern shore of Maryland in the acquisition of vocational training, employment counseling and job placement.  After retirement, she became further engaged in the field of public history and often volunteered for the Starr Center.

Brooks worked on a collaboration with the Grand Army of the Republic Post - Sumner Hall and the Starr Center with the SITES (Smithsonian Institute for Traveling Exhibition Service) as co-coordinator for “The Way We Worked” project. The exhibit showcased the way African Americans worked in Kent county for the past 150 years.

Brooks believes it is important for the stories of African American communities in Kent County to be told and documented. She is in the process of writing the history of her home church.  She also plans to write the history of her elementary school and the history of the community of Coleman of which she grew up.