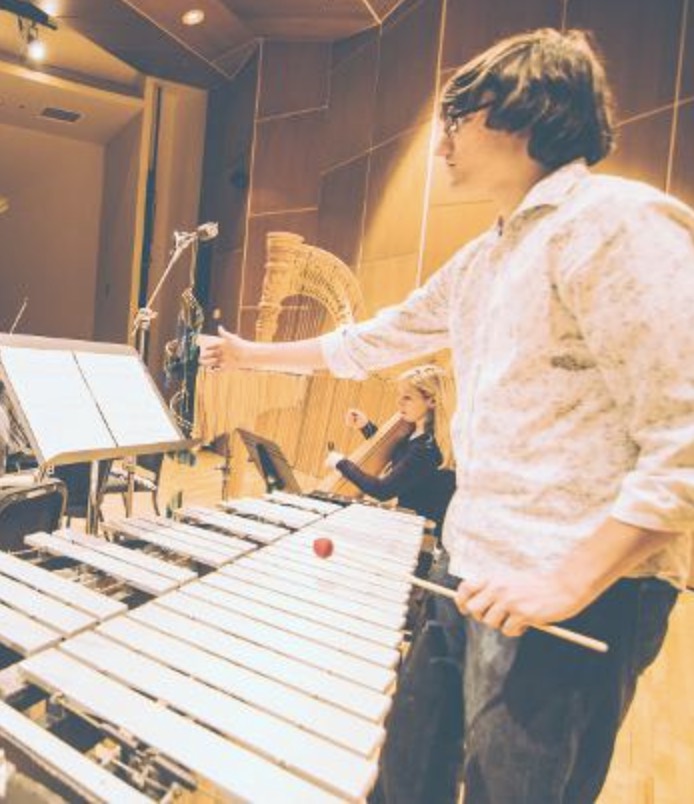 The Washington College Concert Series presents percussionist Eric Plewinski who will showcase the colorful array of repertoire in the solo percussion genre.  Join Eric on a rhythmic journey exploring many instruments, timbres, and moods spoken through the voice of the unique instrumentation of the percussion family. Individual tickets are $20 (adults) and $15 (non-WC College Students / Seniors 65 and over). Youth 18 and under are free. Tickets are available at the door (check and cash) or online with EVENTBRITE (credit card)

Sleight of and Evil Hand by Casey Cangelosi

The Inevitable Descent of Heaven by Paul Elwood

** Eric will be joined on one number by David Agee

Eric Plewinski received his Bachelor of Music degree from the University of South Florida. During his Tampa, FL residency, he performed in various theater productions and as an orchestral percussionist with The Florida Orchestra and the Southwest Florida Symphony. Eric was also a member of the national touring ensembles backing operatic tenor Michael Amante and Grammy award-winning Broadway singer Bernadette Peters and can be heard as a member of the McCormick Percussion Group on Music For Keyboard Percussions, The Music of Gui Sook Lee, and Concerti for Strings With Percussion Orchestra all of which are distributed through NAXOS.

Eric completed his Master of Music degree at the University of Maryland, College Park where he studied with the principal percussionist of the National Symphony Orchestra, Eric Shin.  Additionally, he has studied with Jauvon Gilliam and Tony Ames. In 2019, Eric served as acting principal percussion of the Charlottesville Opera Orchestra.  Previously, Eric has performed with such groups as the Baltimore Symphony Orchestra, National Symphony Orchestra, Richmond Symphony Orchestra, Annapolis Symphony Orchestra, National Philharmonic, Fort Worth Symphony Orchestra, Orlando Philharmonic, Virginia Symphony, Maryland Symphony, Virginia Opera, Washington Chorus, Congressional Chorus, New Orchestra of Washington, Great Noise Ensemble, UrbanArias and regularly with GRAMMY-nominated, Inscape Chamber Orchestra.  Eric can be heard on two albums with the Inscape Chamber Orchestra American Aggregate and Petrushka both released through the Sono Luminus label. Eric has participated in multiple summer festivals including the National Orchestral Institute and four summers at the AIMS festival in Graz, Austria.  Eric is currently on faculty at Washington College, and director of percussion at Robinson Secondary School and West Springfield High School in Fairfax, VA.  Outside of music Eric enjoys stand-up paddleboarding and sailing with his wife on their vintage 1973 Bristol 30 sailboat.

For more about Eric, visit his personal website ericplewinski.com

Virtual preview for 'ISAAC: A Musical Journey,' a play by Marlon Saunders